The couple arrived at at midnight to deliver their first baby. Her sister was with them, and the three happily snapped photographs to document the momentous event. ''We were at what I thought was the best possible hospital," the woman recounted.

Hospital staff noticed that her blood pressure was high, but blamed pain from her contractions. Later, a resident noticed an unusual fetal heart rate on the monitor. But she could not grab the attention of the attending physician, who had been awake for 21 hours and was running between several patients.

''There was panic in the air and panic in the room," the woman said in an article published today laying bare failures that contributed to her baby's death seven hours after her arrival. ''Looking back, had I just gotten up and yelled out in the hallway, right outside the door, I feel like that would have made something different happen." 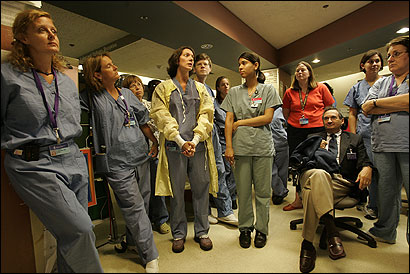 After the infant’s death in 2000, made a number of changes, including daily group sessions to discuss care. This team, which was not involved in the reported case, met this month. (Globe Staff Photo / David L. Ryan)

In a remarkable example of public disclosure, Dr. Benjamin Sachs, the hospital's chief of obstetrics and gynecology, describes numerous judgment errors and miscommunications in the case in today's Journal of the American Medical Association, one of the world's most widely read medical journals. His report highlights how medical mistakes occur, often because of an accumulation of smaller miscues, and the changes his department adopted in the aftermath.

The case, which occurred in November 2000, became a ''burning platform," he wrote, resulting in ''a major reorganization of the way care is provided." The hospital hired airline pilots to train the staff in teamwork and conflict resolution and limited obstetricians' workloads. Since then, fewer mothers and their babies have suffered complications during childbirth, and legal claims also have declined, though it's not certain that the changes caused the drop. {faith’s note – maybe they could also hire midwives to provide one to one care and thus reduce the dangers from medical intervention!}

The patient, referred to in the article only as Mrs. W, suffered massive blood loss, required an emergency hysterectomy, and spent three weeks in the hospital. In the article, Sachs apologizes to the family, putting into bold practice the growing belief that admitting mistakes and apologizing for them is essential to improving a flawed healthcare system.

''It's an extremely powerful article," said Dr. Catherine DeAngelis, the journal's editor-in-chief. ''Doctors can learn from this."

Sachs said in an interview that he decided to describe the mistakes publicly, even though doing so is risky for Beth Israel Deaconess, which delivers 5,000 babies a year, because he wanted to send a ''national message" about the necessity of owning up to terrible results and about the power of teamwork training, which many US hospitals now are adopting. Sachs recently formed a company with the hospital's malpractice insurer to train doctors at other hospitals in teamwork, consulting work he and several other Beth Israel physicians are paid for.

He also wanted to convey how proud he is of the department's doctors and nurses for ''totally changing the way we provide healthcare."

Yesterday, Paul Levy, the hospital's chief executive, sent an e-mail to staff urging them to read the journal article. It is an edited transcript of a discussion among Mrs. W and her husband, her doctors, Sachs, and specialists. The family declined to speak to the Globe, and the hospital did not make available the doctors, who also are unnamed in the article.

''I saw great suffering in this case," Sachs said in the interview. ''I met with the family on a daily basis as they sat outside the ICU. I was the recipient of their anger, their appropriate anger."

That night in November 2000, Mrs. W's regular obstetrician was not on call, but the doctor made arrangements to have her patient given the drug misoprostol, which triggers labor, because she was past her due date [i.e. an elective induction]. Staff members gave Mrs. W the drug at 10 p.m. and sent her home, despite slightly high blood pressure. Sachs said in the article and in an interview that she should have been monitored in the hospital, but that ''it was a very busy night."

When doctors admitted her at midnight, her blood pressure had risen even higher, raising the possibility of pre-eclampsia, a condition that can lead to serious complications including separation of the placenta from the uterus and even fetal death.

Between 4 and 5 a.m., doctors missed a chance to stop the tragic cascade of events, when the resident, a physician in training, did not go above the attending physician with her concerns about the baby's unusual, up-and-down heart rate. Sachs believes the physician's judgment may have been impaired because he was on duty for so long, helping create a condition called ''vigilance fatigue," or a loss of objectivity that can occur during prolonged, intense monitoring of a situation. He said doctors should have performed a caesarean-section delivery by 5:30 a.m. ''This would probably have resulted in a live birth without complications," Sachs wrote.

When doctors transferred Mrs. W to the operating room for an emergency caesarean at 6:45 a.m., they found her placenta had separated from her uterus, and her uterus had ruptured. The baby, a boy, was stillborn. [And ACOG wants you to think that it is midwives and episiotomies that makes childbirth dangerous!]

In the article, Mrs. W said she remembered her husband telling her, '' 'He didn't make it.' And I said 'I know,' because I had that sense."

Sachs said he and other Beth Israel Deaconess doctors analyzed the case immediately, and he felt the hospital was responsible. He pushed for an immediate settlement, before the family sued, which Lawyers Weekly reported as $2 million in a 2001 article.

And the department began to reshape itself.

The Risk Management Foundation, the malpractice insurer for doctors at Harvard teaching hospitals, asked Sachs if he'd try an airline industry program called crew resource management, widely credited with reducing plane crashes. He hired two pilots to train the staff in such skills as the ''two-challenge rule:" a staff member who disagrees with a colleague's decision politely states his or her concerns twice -- and then seeks a superior if not satisfied. Such training could have helped the resident in Mrs. W's case go above the attending doctor.

The department set up three types of teams. The core teams treat patients, while a coordinating team led by a nurse and senior physician oversees the core teams' decisions and workload. A contingency team is activated for emergencies. The unit holds at least two team meetings a day to discuss the plan for all patients. Previously, when doctors and nurses changed shifts they updated only replacements about their specific patients. Now all staff are responsible for all patients, Sachs said.

The hospital prohibits obstetricians from caring for more than three patients in labor at once. Sachs also encourages doctors to sign up for 12-hour, rather than 24-hour, on-call shifts. But the hospital has not gone as far as to mandate the change, and he acknowledges some physicians oppose shorter shifts because they would be on call twice as often.

According to Sachs, the number of lawsuits, pre-lawsuit claims, and cases that the insurer believes could result in a claim against the hospital's obstetricians for severe complications dropped to four in the three-year period ended last September, compared with 13 for the three years before the department adopted teamwork training. Since 2000, the proportion of mothers who experienced an adverse event, either avoidable or unavoidable, dropped to 5.3 percent from 6.3 percent. The hospital's rate of adverse events during labor and delivery is the lowest among 20 other medical centers in a national database, Sachs said.

The Journal of the American Medical Association did not print these results because the hospital did not establish cause and effect through a randomized trial.

While the ''data is not definitive," agreed Dr. Allan Frankel, director of patient safety for Partners HealthCare, the parent organization of Brigham and Women's and Massachusetts General hospitals, he said highly reliable industries such as nuclear power and the airlines all consider training in teamwork essential to reducing the number of accidents. ''This will be seen as essential" in medicine, he said.

As for Mrs. W, three years after her disastrous hospitalization, she reports in the journal article that she has almost fully recovered physically but still is up and down emotionally. She and her husband have adopted a healthy child.

At 41 weeks of an uneventful pregnancy, Mrs. W arrived at one night in November 2000.

10 p.m. Sent home. On the way had contractions, returned to hospital.

''We trusted a lot. We were at what I thought was the best possible hospital. . . . Looking back, had I just gotten up and yelled out in the hallway, right outside the door, I feel like that would have made something different happen."

''That night I saw residents who were afraid. They were either unable or unwilling to get the doctor, when clearly things weren't going the right way."

''I saw great suffering in this case. I met with the family on a daily basis as they sat outside the ICU. I was the recipient of their anger, their appropriate anger